I'm sure this was not the best day for this...but it's the day they scheduled for us two months ago.  It is said one should pump their septic every 2 years. We've had several families living here and we haven't pumped for 4 years. It was time.  I think we're safe to do this every 3 or 4 years. 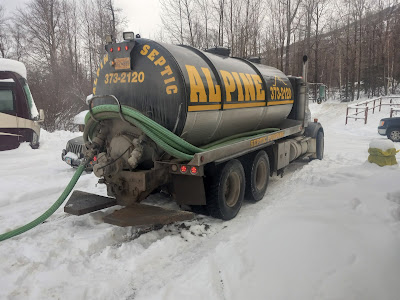 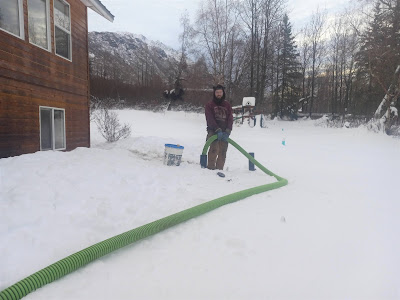 The poor man got stuck trying to climb out of our icy driveway. Michael and Alex had shoveled, but when it rains, melts, freezes....there is only so much that can be done.
It would have been interesting watching him climb to the top of the driveway and slide back...except I needed to be at produce co-op and had to wait until he cleared the driveway.
Michael drove me to the next town over. I haven't had to have him drive me anywhere in 2 winters, but I don't like ice at all.  Michael and Dad went out to lunch, ran some errands and then drove out to Big Lake to buy FIREWORKS for New Year's Eve.
I spent four hours with lists of produce, sorting, bagging, labeling, delivering... when we got home Arielle and the boys were here!
We visited. Michael immediately ran out again. Cy found an ice auger for sale from a man north of us. Michael went to pick it up.

I made soup and biscuits while he was out. It was tasting good, but a bit blah. The girls were retelling their afternoon adventures to me while I cooked...I just kept putting salt into the pot. I lost track of how many spoonsful of Better than Bullion I put into the pot. Too many.  Even Dad said it was salty. ::snort::
Allie update: She was up once last night due to pain. She has settled into Tylenol and took the normal dosage of it. She was up, out and about most of the day.  Her appetite is returning. She was sore tonight but feeling good about her improvement. We're proud of her.
It's raining outside. It will freeze. We've already decided we will stay in tomorrow.  It seemed like the perfect night for hot drinks. We opted for coco bombs made by CoCo (Krista). 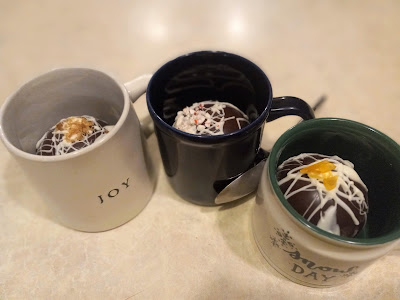 We settled down to watch something on Netflix. I fell asleep halfway through it. Oh well, I tried.