This is not a good look for a woman of my age. I saw stars, moons and maybe a couple of pink elephants. I have my first mild concussion. I am fine. I like the dark. Screens are making me woozy so I won't be blogging much, quite yet, and I have so MUCH to blog...hundreds of pictures to sort through and edit, New Year's Eve, The Gingerbread Competition...Ah well.

It happened yesterday afternoon. We were all outside shoveling. The girls and I had finished our part and were swaggering over to see what help Michael and Alex still needed when my legs simply went out from under me, and I hit hard. My glasses flew off my head. I was worried I had broken a couple of teeth. I was in pain, dizzy, nauseated...and now I am resting as much as possible and won't be using screens until I can do so without feeling woozy.  I'm doing my best to give my brain a rest...and to not stress about the forced rest.

Actually, working together outside was a great way to start a new year...and Millie is a great cuddle companion. 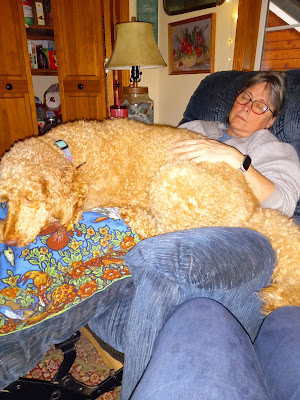 I ache everywhere...I.hate.ice. at least ice on the ground.  BTW, I told Michael to take the picture because I was delaying his efforts to make me move.

(Editor's note: Yes, she did ask me to take the picture, but no, I was not in a hurry to get her up and moving.)