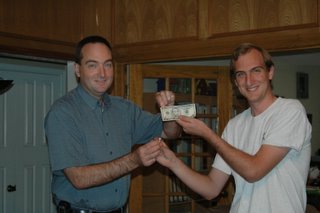 Mike began a tradition with the children years ago. Each year the first person to find that year’s penny receives a $5 bill. He is SURE that the children have taken advantage of his forgetfulness and more than one child has collected each year. {G}

Over the years the tradition has developed and currently this is the plan. The first child to find a 2006 penny receives a $5 bill. Exchanging Lincoln for Lincoln. All other children will collect a $1 bill when/if they find a 2006 penny before the end of the year.

Josiah has passed up hundreds of the pennies that have come through his till. He waited to find one – which he did while cleaning up at Chick Fil A. {G} Mike wanted this well documented so no other child claims the $5 reward. He thinks this is the earliest that anyone has ever found a year’s penny.

Watching all the hulabaloo, Zander asked me, "Mom, WHAT? Is this Sixty Million dollars?" {vbg}

Joyfully Penned by DeEtta @ Courageous Joy at 2:19 AM

Mike goes on record as saying that any pennies must be redeemed by June if they are to be exchanged for dollars. {G}